Difference between revisions of "Da.Yo.Ne" 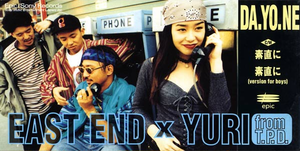 There are currently two versions of "DA.YO.NE" to be found in EAST END×YURI's discography.

DA.YO.NE
Found on EAST END×YURI's debut indies album, denim-ed soul, as track #4. It is also found on the single "DA.YO.NE" as track #1.