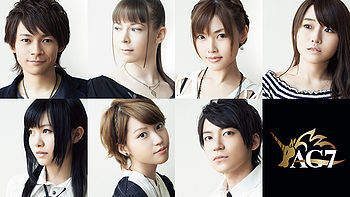 The members of AG7.

They were given their name because at the time of their creation, there had been 7 winners of the ANIMAX Anisong Grand Prix so far. So far they have only released one song, the second A-side on 2013 winner Kobayashi Tatsuyuki's debut single. It was used as an ending theme for the anime Battle Spirits Saikyou Ginga Ultimate Zero.