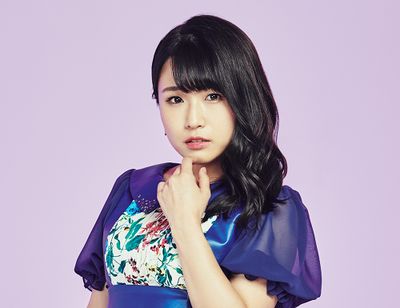 Kawano Marina (河野万里奈) is a Japanese pop singer signed to Teichiku Imperial Records (formerly SME Visual) and debuted in 2011. She was the winner of the fourth Animax Anison Grand Prix. Her debut single was the opening theme to the anime A Channel. 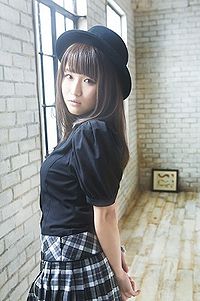 When she was young, a friend's mother was a piano teacher, so from there she began learning piano and got interested in singing. Starting in high school, she began to perform playing musical instruments like the piano while she sang, having recitals at places like the town hall, and singing Shiina Ringo songs. She began learning guitar in high school as well. In college, she was in the light music club, where she was in charge of guitar and vocals. They sang many songs from anime series, like Macross F, SLAM DUNK, and Sailor Moon.

In 2010, she heard about the Animax Anison Grand Prix, and entered in its fourth annual competition. She won out of 10,189 applicants. In January of 2011, her song "FOCUS! FOCUS!" was released in a pre-debut CD bundled with an issue of "LisAni!" magazine. In May of 2011, she debuted with the single Morning Arch. That song became the opening theme for the anime A channel. A month after her debut, she was a featured vocalist in the song "Runaway" by Ouzoku Band, on their album CROSS PEACE.

In 2012, she released another single, Takaramono, which was used as the ending theme for Natsume Yuujin-chou. A month later, she released the song Balloon Theater for the anime Nekomonogatari (Kuro), but this song was not released as a single. Instead, the song was included on a bonus CD bundled with the DVD release of the anime. It included the full song, the TV version, and the instrumental. In the summer of 2012, she was also included in the mook Anisong Angel, and had an interview with a photoshoot displayed along artists like LiSA and Nakajima Megumi. Starting in June, she also had a once-a-month webcast called "Onegai♡Marina-chan" (おねがい♡マリナちゃん; Please♡Marina-chan) in which she would cosplay as various characters and have small live concerts streamed live via NicoNico Douga. The characters she cosplayed were not from any specific anime or game for licensing reasons, but were rather general characters, like a tsundere maid or cat-eared guitarist. She would take requests for what type of character to cosplay next over Twitter. She released one every month until December of 2012. The songs she played at the streamed live performances often fit the theme of the character she cosplayed, usually anime covers. Her last release in 2012 was the song Arata Naru Sekai, which was the theme song for the multimedia project of the same name. The song was distributed via a bonus CD on the official release, and its "short version" was released as a digital single.

Her first release of 2013 was the song Kieru daydream, which like the others she had recently released, was not put out as a single, only included as a bonus CD with the DVD release of the anime. Throughout the next few months, she went on a tour of Japan with her first one-man live concert, "Imperfect Blue." She sang all of her own original songs, and a few anime song covers. In October of 2013, her webcast "Please♡Marina-chan" had a one-off return in order to promote her upcoming album. She also had a separate Nico Nico broadcast to promote her third single. In that same month, she released the single Sono Koe wo Oboeteru. Her official site was redone at this time as well. Shortly before the release of her album, she collaborated with Haruna Luna on the song snowdrop. The collaboration with the two of them was used as the ending theme to Monogatari Second Season. It was released as a digital single in November. Her debut album, First Touch, was released in December of 2013. it included all of her single A-sides to date, all the songs that she had released for anime series but hadn't released as a single, and her own solo version of "snowdrop." 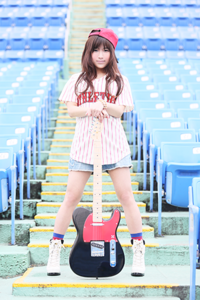 Slowdown of activities and switch to Dear Stage

In February of 2014, she announced via Twitter that she would be performing some songs for the SQUARE-ENIX-produced game, Gunslinger Stratos 2. A promotional YouTube video was also released at that time, showing Marina singing some of the songs for the game in a recording booth. Her next announcement came in June, where she announced that she would be contributing a song, called "Hanaato -shirushi-", to another Monogatari series release. In July, she became part of the unit "AG7", which was made up of all the previous Animax Anisong Grand Prix winners--Kita Shuuhei, HIMEKA, Sasaki Sayaka, Suzuki Konomi, Okamoto Natsumi, Kobayashi Tatsuyuki, and herself. The unit performed a song, "Endless NOVA", on the debut single of Kobayashi, the most recent Grand Prix winner. The song was the ending theme to the anime Battle Spirits: Saikyou Ginga Ultimate Zero. She also appeared as part of the unit tokimeki/cm to sing a version of the song "Kogarashi Sentiment." By coincidence, the singles containing both songs were released on January 23rd. In October, the full version of Hanaato -shirushi- and its instrumental were officially released. Like many of her other anime theme tie-ins, this was not released as a single, but was instead included as part of the anime soundtrack. On Christmas Eve, Hanaato -shirushi- was also released as a digital single through various channels.

She then fell mostly silent until July of 2015, when the soundtrack to Gunslinger Stratos 2 was finally released. It contained two songs with guest vocals by Marina: "Infinite Reflections" and "Mind Mission." In October, it was announced that all of Marina's Monogatari series-related songs would be included on a 2CD collection containing all of the Monogatari series openings and endings. Her next announcement came in March of 2016, when she announced that she would be leaving Sony Music's child label Aniplex, and instead becoming a part of the label "Dear Stage". In a later blog entry, she stated she had left Aniplex in 2015, so the actual date that she went independent is uncertain. At this time, she also began using the kanji of her birth name (万里奈) as opposed to the katakana she had been using as a stage name. In late November it was announced via her Twitter that she would be providing the opening theme for the game "Grisaia: Phantom Trigger". The song, "Sekai no Hate", was released as a digital single.

On March 31, 2017, she released a music video for a new song, "Sebangou 009 ~Eikan yo Boku ni Kagayake~", on the official Dear Stage YouTube channel. She had performed the song live several times during her break as well, prior to the release of the video. Her official website was finally relaunched around this time as well. She also provided the Japanese version of the Nier Automata theme song, "weight of the world". Thanks to her involvement with the hugely successful game, she was able to participate in several concerts around the world where she sang her version of the theme song. In July of 2017, her first nationwide tour was announced. On September 23rd, she released her first single since 2013--an official release of "Sebangou 009 ~Eikan yo Boku ni Kagayake~". However, it was only sold at her live performances, as a concert-limited release.

In May of 2017, she held a live performance for her debut anniversary. Her guest appearance at the AnimeNEXT convention in New Jersey, her first US appearance, was also announced. 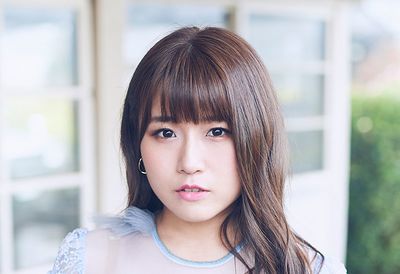 On February 10th, 2019, it was announced that Marina would make her major-label "re-debut" under Teichiku Imperial Records (a sub-label of Teichiku Entertainment), remaining under Dear Stage for management. Her re-debut would be with a new single called "Maningen Nyuumon" on May 15th, 8 years after her original debut. Four days later on May 19th, she would also hold a one-man live performance.

In September, there were several pieces of good news. It was announced that she would throw the opening pitch at the 9/19 baseball game between the Hokkaido Nippon-Ham Fighters and the Tokyo Yakult Swallows, which would fulfill a lifelong goal of hers. In addition, her second major label single with Teichiku Imperial Records, "Suiren", was announced. It was to be released in late November of 2019.