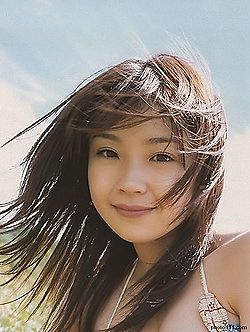 Akiyama Nana is a Japanese gravure idol (former U-15), actress and model for Pichi Lemon. She was signed as a singer to Victor Entertainment Inc. in 2006.

Akiyama Nana began her career as a child model, appearing in television commercials. She made her official debut in 2000 as a model of Kids' Debut, and three years later was made a model of the junior fashion magazine Pichi Lemon, becoming a Pichimo (short for "pichi model"). By this time she was appearing in several gravure magazines, including Up to Boy and Pure Pure. She also became a campaign girl for Nissan Motor and Sumitomo Forestry commercials.

Akiyama made her debut as an actress in 2005, being cast in the role of Amami Akira on Kamen Rider Hibiki, boosting her popularity tremendously. She continued to act in various dramas since then. The following year she was signed to Victor Entertainment and released her first single and a DVD documenting her journey to becoming a singer.

When her first photobook Pupil was released in spring 2006, it rose to #1 on the Amazon charts.