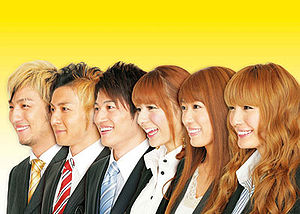 Aladdin (アラジン) is a Japanese idol group that debuted in 2008 for the show Quiz Hexagon II. The group formed in July 2008 to combine the two Quiz Hexagon units, Pabo and Shuchishin. They released their first single later that month, entitled Hi wa, Mata Noboru, and started their own radio show named Aladdin's All Night Nippon. They were also featured on the album WE LOVE Hexagon by the end of the year and on the television program Kouhaku Uta Gassen as Shuchishin with Pabo.