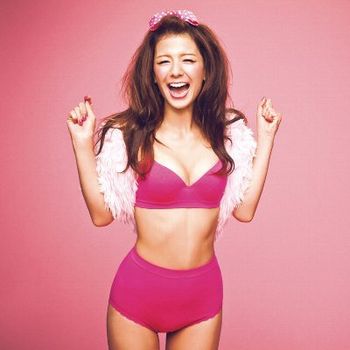 Suzanne (スザンヌ) is a Japanese talento, singer, gravure idol and model under K DASH Stage agency. She has been a member of the Quiz Hexagon' disbanded groups/units Pabo, Aladdin, Tomo to Suzanne, Suzanne x Suzanne and famille.

Suzanne got her start in show business when she was scouted when she was 14 years old. She debuted as a model time later, after she moved to Fukuoka. Following her appearance on the local TV show MTM, in 2006, she moved to Tokyo and joined K DASH Stage agency. That same year she got own corner segment on the TV show Blog TV, and appeared on Gravure Talk Audition show.

In March 2007 she joined the groups Nakano Fujoshi Sisters and Fudanjuku, however she graduated one year later, before their actual debut. In September that same year she joined her first Quiz Hexagon' group, Pabo and she finally debuted as a singer. In 2008 she debuted as an actress with her participation on the dorama Muri na Renai.