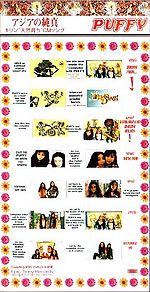 "Asia no Junshin" is the debut single released by PUFFY. This single was produced, composed, and arranged by Okuda Tamio with lyrics written by folk singer-songwriter Inoue Yosui. They later recorded a self cover of the song on their collaborative album Shopping in 1997. The title track was used as the Kirin Beverage's "Tennen Sodachi" CM song. The song won the duo the best new artist category at The 38th Japan Record Awards[1]. The single reached #3 on the weekly Oricon chart, and stayed on the chart for a total of 46 weeks. In all the single sold a total of 1,189,000 copies[2], making it the band's second best selling single[3]. Because 1,057,630 copies were sold in 1996, the single reached #15 on the yearly Oricon chart for that year. It was certified Gold by the Riaj for over 100,000 downloads.

An English version of the song appears on their 2002 North American best album, An Illustrated History titled "True Asia".