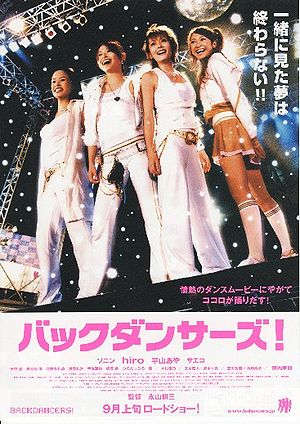 Backdancers! (バックダンサーズ!) is a Japanese film that was released to theaters in September 2006. It stars hiro, Sonim, Saeko, and Hirayama Aya as back-up dancers to mega popstar Juri (Hasebe Yu) until she shockingly announces her retirement during a concert.

Yoshika, Miu, Aiko, and Tomoe are back-up dancers for Japan's hottest pop act, Juri. Together, they are "Juri With Backdancers", but when Juri announces her sudden retirement, the Backdancers are left behind. All girls have very different personalities, but they do have one thing in common: the love of dance. Along their way to fame they must deal with personal issues, managers, and rival act Mayu With Super Tigers.