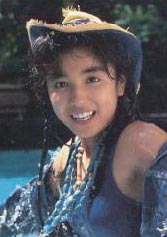 Chiba Mika (千葉美加) is a Japanese pop singer and actress.

Chiba Mika got her start in 1986 when she auditioned at the HoriPro Scout Caravan contest. She sang the Honda Minako song "1986nen no Marilyn" for her audition. She won Best Vocals at the contest and signed a contract HoriPro afterwards. She made her acting debut that same year, appearing in the dorama Shin Necchuu Jidai Sengen.

Chiba made her singing debut in 1988 with the single "Shooting Star" under the label CBS Sony Records. "Shooting Star" was the ending theme for the tokusatsu show Denou Keisatsu Cyber Cop, which Chiba played the character Uesugi Tomoko. She soon released her second single "BRAND-NEW TOMORROW" five months after her debut single. During the single released, Chiba was labeled as a "myuudoru" as she was an idol on the outside and a musician in the inside due to being a talented singer.[1]

In 1991, she annouced at her final concert in Tokyo Geijitsu Gekijou that she was going to release music all over Asia under the name Qien Ye Mei Jia. She released her first Chinese album, entitled Hé Hún Hàn Cái, in Taiwan a year later. She released three albums in Taiwan before going back to the Japanese music industry.

When she came back to Japan, Chiba Mika released four more albums and a the single "E=MC2", which is a cover of a Yamaguchi Momoe song. Two years later after releasing "E=MC2", Chiba retired from show business as her contract with HoriPro came to an end. She briefly came back in 2003 as she made a guest appearance on the tokusatsu show Chouseishin Gransazer.

She is currently married and has two children.