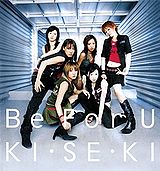 "Chikara" is a song released by BeForU and included on "KI・SE・KI" single as track #2. The song was originally just sung by Kosaka Riyu until it was released on their debut album BeForU with Backup vocals by the group.