"DICE" is hide's third single. The single reached #6 on the weekly Oricon charts and charted for ten weeks. 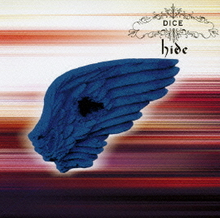