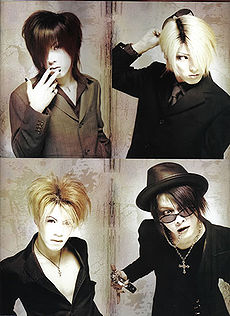 Dué le quartz
Dué le quartz (デュールクォーツ) was a visual kei J-rock band that formed in December 1998 and signed to PS Company, a sub-division of Free-Will. The band opened the fanclub "Baby Merry" on August 1, 2000. After releasing a few albums, several singles and a greatest hits compilation, the group disbanded in 2002. Vocalist Sakito and bassist Kikasa later reunited to form the band 【FIGURe;】 (with drummer KAZUKI occasionally providing session work) and guitarist Miyabi changed his name to "Miyavi" and started a solo career.

In December 1998, Sakito and KEN formed Dué le quartz and played their first live on February 14, 1999 at Shibuya CYCLONE. They recruited bassist Kikasa somewhere in between, officially adding KAZUKI to the mix on March 22 of that year.

KEN left the band in May 1999 due to musical differences, leaving the guitarist gap to be filled by Miyabi on June 29, 1999 and complete the band's final lineup.

After a hugely successful run and amassing a large fanbase, Kikasa announced his withdrawal, which led to complete disbandment in 2002. They played their last live on September 22, 2002 at Akasaka BLITZ.