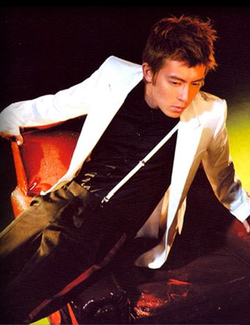 He was formerly an artist of the Emperor Entertainment Group (EEG); however, his contract with EEG ended in 2005. He is the founder of the fashion label CLOT Inc and is also CEO of the record label Clot Media Division Limited. He is currently living in Hong Kong and relocated in Taiwan in 2013. He owns a lifestyle company named CLOT, which works with labels and artists from all around the world gathering them all together in unison in the Greater Asian region, although they are based in the Hong Kong region.

He also sings cantopop and can speak English, Cantonese, and Mandarin. However, as with many foreign-born Chinese, Edison does not have a perfect command of Cantonese or Mandarin. He is idolized for his "cool" attitude and his good looks, though critics cite him as conceited ("chuen", "串", in Cantonese slang). Rising to fame, he quickly established himself as the best selling balladeer by having his CDs sold over in millions before verging to RnB and Hip hop. He is known for his deep-airy and lyrical baritone voice as both a Cantopop and Mandopop singer.

He dabbled in modelling as well including Levi's Jeans and Samsung Cellphones. Since then, he has involved with numerous films and advertisements.

As of February 21, 2008, he has announced his indefinite departure from the Hong Kong entertainment scene due to his sex photo scandal earlier that year. He returned in 2010 but has yet to make a comeback in the Hong Kong film industry.

Regardless of the scandal, He gained the title "Asia's Eminem." [1]

In comparing his vocal techniques to Hong Kong singers Jackie Chan (for his usual nasal voice), Takeshi Kaneshiro (for his distinctive low register), his voice is also comparable to international musicians R Kelly (for his falsetto) and Eminem (for his technical rap skills); His also known for executing the dynamics sweeping from his whispering pianissimo to his theatrical fortissimo effect in some of his old recordings as well.

His music has encompassed a broad range of genres with ballad, soul, contemporary pop, hip hop and RnB. When he was little, he listens to cartoon songs like Doraemon and Disney music. He grew up mainly listening to hiphop and RnB from his friend's recommendation. [2]

In March 2004, Edison Chen was assaulted by two teenagers, aged 16 and 17, in downtown Hong Kong. The two teenagers apparently mocked Edison by breakdancing in front of Edison as he was leaving a hair salon. One of the teenagers swung at Edison and hit him in the right ear. The two teens ran off whilst Edison gave chase for nine city blocks before returning to the same shopping arcade. There he called his "assistants" (rumored to be ex-Triads) to look for the two teens. They were eventually caught on a bus.

On March 9, 2007, Chen was returing home when he discovered a Taxi, that had just dropped off some passengers, blocking his gate. The taxi driver requested that Chen back-up so that he could pull out and let Chen enter; however, Chen's security guard requested instead that the taxi driver pull over so Chen could pass, resulting in the driver insulting the guard and a subsequent argument between Chen and the driver. Eventually, Chen got out of his car, kicked the taxi several times and broke all the windows. He was charged, convicted and fined HK $4,700.

In January 2008, Chen was involved in a widely-publicized sex scandal which involved multiple sexually explicit photographs of himself and other people were circulated on the Internet. Celebrities implicated in the scandal included Gillian Chung, Bobo Chan, Mandy Chen, Candice Chan, Rachel Ngan and Cecilia Cheung. The photographs also included 6 other women and other men, as well as his current girlfriend Vincy Yeung. On February 21, 2008, he officially announced his indefinite departure from the Hong Kong entertainment industry.

Although he's untrained in singing, he is known for his distinctive head and nasal voice, Chen possesses the vocal range of a lyric baritone for his sweet and mild singing voice while his tessitura is in the range of E3 to F#4.

During his years as both Cantopop and Mandopop singer, he has been known to sing "typical pop songs" where he showcase his distinctive natural vocals on his early recordings. From his album Please Steal This Album, some of his songs can be heard of his improvement on his vocals and the ability to reach high notes of a high lyric baritone to a low tenor.

His version of Eason Chan's "Nicotine" where he hit the high notes of G and G# above middle C.[3]