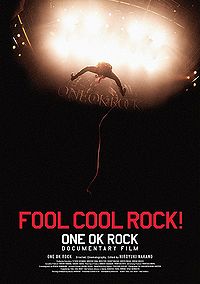 FOOL COOL ROCK! ONE OK ROCK DOCUMENTARY FILM" is the fifth DVD and third Blu-ray released by ONE OK ROCK. It is also their first documentary film. It features a documentary on ONE OK ROCK's tour in Asia and Europe in 2013 "Who are you?? Who are we??" for which they visited 11 countries: France, Germany, U.K., Netherlands, Hong Kong, Korea, Thailand, Malaysia, Singapore, Indonesia, and Taiwan. The documentary is directed by Nakano Hiroyuki.