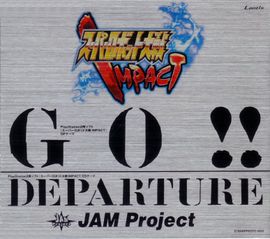 GO!! / Departure is the 11th single released by JAM Project. The songs were used as the opening and the ending song of the PlayStation 2 game: Super Robot Wars IMPACT. The single reached #72 on the Oricon weekly charts, and charted for one week.