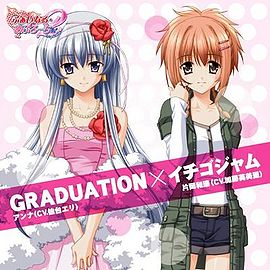 GRADUATION is a common single released by Sendai Eri and Kato Emiri. The title track was used as the insert song of the PSP Game: Final Approach 2: 1st Priority, and the B-side track was used as the character song of Kataoka Kazumi, who's one of the protagonist of this game. The single was released on the same day with Okui Masami: Starting Over and Ohmi Tomoe: Beloved singles, which were used as the opening and the ending songs of the same game, and it was released under Okui Masami's label: evolution. Due to the length and the price of this single, it is often mislabeled as an album. The single did not chart on the Oricon weekly charts.