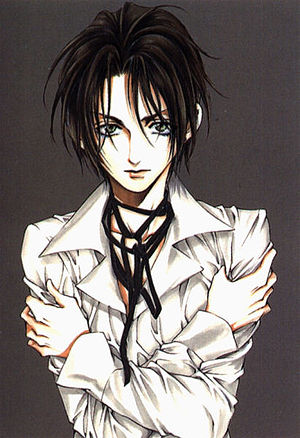 Hakushaku Cain Series (伯爵カインシリーズ) or Count Cain is a gothic styled shojo manga created by Yuki Kaori. The series made its debut in 1992 in the pages of Hana to Yume magazine. The series ran for a total of five volumes until it was placed on hiatus in 1994, when Yuki started work on her epic fantasy Tenshi Kinryouku.

The series made a comeback in 2001 (after Tenshi Kinryouku had finished) titled as Goldchild. This arc of the story ran in Hana to Yume until 2004, where it spawned eight collected volumes of manga.

Godchild hit the pages of Shojo Beat (in the debut issue, released July 2005) in the United States. The series only ran in the magazine for a year, with the last issue being June 2006. Both arcs (all 13 volumes) of the story have since been released by Viz Media, under their Shojo Beat manga line.

The series was inspired by Yuki Kaori's love for detective mystery movies and Sherlock Holmes.

The series is based around the adventures of the nobleman, Earl Cain, and takes place in 19th century England. Cain is an unsual boy with unusual interests, such as a hobby for collecting poisons. He became the young heir to the Hargreaves name and estate at age twelve, after the death of his father.

The Cain Saga starts when Cain is 17 years old and living in London, away from the castle where he grew up. For the most part, the early books are made up of self-contained stories, often giving a small bit of insight into Cain's mysterious past. In the later volumes of Goldchild, a larger plot is uncovered by Cain, that reveals his past. He also learns that a secret organization is after the lives of him and everyone he loves, led by someone from his past.

Note: This is not a complete list of characters.

Cain is the young nobleman that the stories focus around. He was born into the rich and famous Hargreaves family. He had a rough time when he was young, growing up with his father. After the death of his father, he became the heir to the Hargreaves name. During this time, Cain was taken care of by his butler Riff.
He is named Cain because "Cain was the first person who killed his relative" according to the Bible. Cain's father, Alexis, blamed him for the death of his sister (Cain's mother), who died while giving birth to him.

Riff is the loyal servant of Cain, who essentially raised him after Cain's father's alleged death.

Mary Weather Duke (as she is first introduced) is a young lady whom Cain meets in the second book, "Sound of a Boy Hatching". On her first appearance, she seems to be a fortune teller living on the streets. Her mother was allegedly murdered by the Hargreaves family.