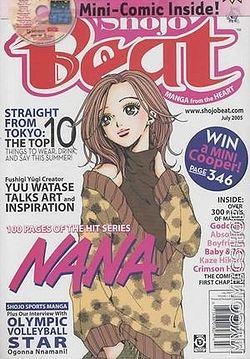 Shojo Beat was an North American-based, monthly shojo manga magazine. The magazine is an original based shojo magazine (unlike its brother magazine Shonen Jump) published by Viz Media. The magazine hit stands in June 2005, soon after the departure of Animerica Extra. The magazine takes serials from different Japanese magazines such as Hana to Yume, Shojo Comic, LaLa, Ribon, and Bessatsu Margaret.

After it's inital launch, Shojo Beat under went a few revisions. One thing was the manga became printed with both blue and pink ink, making it the first American manga magazine to use two color tones, which is commonly done in Japan.

Other tha manga, the magazine also has articles on Japanese pop culture such as: movies, novels, actors and actress, music, and fasion. Besides the magazine, Viz's has also created a Shojo Beat label that includes manga, light novels, anime and film DVDs.

In May 2009, Viz announced they would be discontinuing the magazine. The final issue of Shojo Beat was released in July 2009. Even though the magazine was dropped, Viz will continue to release things under the Shojo Beat imprint.

These are the series that were still running when the magazine ended.