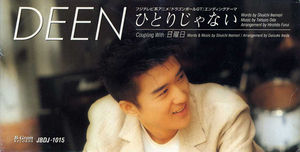 "Hitori Janai" is the ninth single released by DEEN. The title song was used as first ending theme for the anime Dragon Ball GT. The single reached #3 on weekly Oricon charts and charted for ten weeks, selling 352,390 copies and becoming the #90 single of the year.