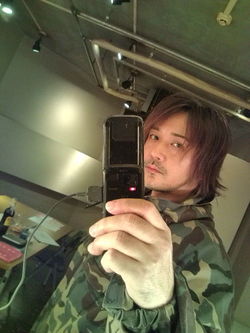 I.N.A is a Japanese musician, producer, programmer, composer, recording engineer and DJ. He became known as the percussionist and programmer of hide's bands, hide with Spread Beaver and zilch. I.N.A played an important role behind Spread Beaver's sound in regards to his support of hide's overall vision. He also formed SONIC STORAGE along with KAZ and Dope HEADz with HEATH and Pata from X JAPAN.

I.N.A debuted as a DJ during X JAPAN live tour Violence In Jealousy Tour 1991 ~Yume no Naka ni Dake Ikite ~. Besides being the record engineer of X JAPAN he also became a member of hide's band, hide with Spread Beaver, as the percussionist and programmer. I.N.A also was the programmer of hide's other band, zilch. He also helped make the release of Ja,Zoo possible after hide's death in 1998.

I.N.A is now in the band Dope HEADz with HEATH and Pata from X JAPAN. He also formed a temporary band called nothing that remixed old hide songs and performed them live at memorial events.