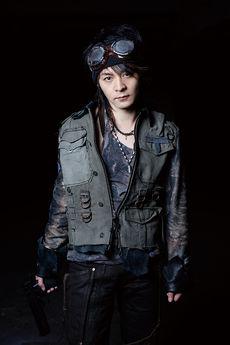 KAZ is a Japanese musician, producer and guitarist of the bands VAMPS and Oblivion Dust. He became known as the guitarist of hide's band, hide with Spread Beaver. 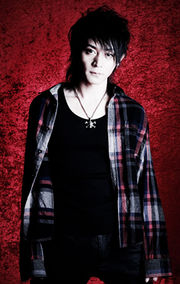 When he was a child, he was very competitive and absolutely hated to be defeated in anything. He can be an extremely obsessive person and can totally commit himself to something. However, if he's not interested in something, he just won't bother about.

He was guitarist of Gemmy Rockets and The Lovers, later of Oblivion Dust, until September of 2001, when Oblivion Dust disbanded.

In early 1998, he joined in hide with Spread Beaver as guitarist (although, he follows as Oblivion Dust member).

In 2001, he started working with L'Arc~en~Ciel's bassist tetsu on his solo project TETSU69.

In 2002, he formed the rock unit Spin Aqua with singer/model/actress Tsuchiya Anna. After producing three singles and one album, they dispersed in middle 2004.

In 2003, KAZ being Spin Aqua member began to work along hyde as co-producer and guitarist in various singles and the album of 2006 FAITH, being also guitarist of various hyde tours. Plus, he began in late 2004 the band SONIC STORAGE with I.N.A. of Dope HEADz.

In late 2006 he produced a remix song from FAKE? that was released like a bonus. In June 28th 2007 was announced that KAZ is reuniting as Oblivion Dust member again.

In 2008, KAZ and hyde formed the band VAMPS. In 2012, he started the Halloween project HALLOWEEN JUNKY ORCHESTRA along with hyde.