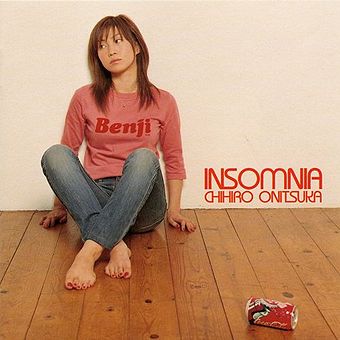 Insomnia is Onitsuka Chihiro's debut album, which was released a month after the release of her fourth single, "Memai / edge". As well as the single songs with tie-ups, three songs from this album had additional tie-ups. "Innocence" was used as the Applied Material-sha CM song, "BACK DOOR (album version)" was used as the NHK TV show Yume Densetsu ending theme song and "Rasen" was used as the movie Wasabi's insert song. The album reached #1 on Oricon charts and charted for 86 weeks. This is currently Onitsuka's only #1 product. By the end of 2001, Insomnia had sold 1,231,860 units, making it the #16 album of the year. In total, it sold 1,345,000 units.