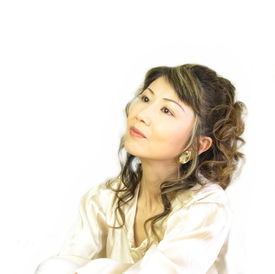 Graduating from Gakushuuin Daigaku with a degree in Philosophy, Kobayashi got her start in 1984 as a composer with the song "Moon Eyes" by Bread & Butter. A year later, she made her singing debut by releasing the single "Koi ni Ochite -Fall in love-", which was used as the theme song for the TBS dorama "Kinyoubi no Tsuma-tachi e". The single became a huge hit and helped Kobayashi to win the Honorable Mention Award for composition at the 27th Annual Nihon Record Taisho. After the release of the single, staff members mentioned that her voice sounded like Karen Carpenter's and suggested that send a demo tape to Richard Carpenter. Impressed with Kobayashi's demo tape, Carpenter produced the album City of Angels in 1988.[1]

In 1991, she moved to England and released two albums there under the name holi. In 1995, Kobayashi collobrated with U2's Brian Eno on several tracks that were suppose to be on the album Original Soundtracks 1. However, they didn't appear and currently have not be released officially.[1]