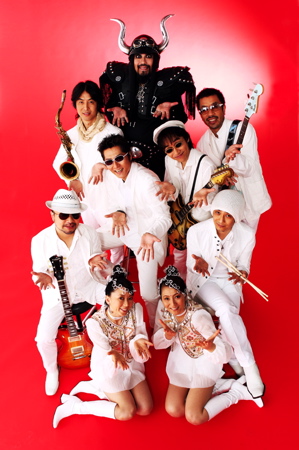 Kome Kome CLUB (米米CLUB) is a Japanese pop band that formed in 1981.

The band started as a university movie club named A-CEN from 1979 to 1982. In 1982, the band changed their name to Kome Kome Club after hearing the band Tom Tom Club. In the beginning, the group was suppose to be more like a parody band, according to vocalist Onoda. To support this idea, the band taped a ten track demo track with tracks centering about the idea of "rice". But, the group didn't get into full gear until they graduated from college in 1982.

For the next three years, the band played at mostly in live houses till they got their break in 1985. That is when CBS Records signed them to their label and they released their first single, I CAN BE, soon after as Kome Kome Club (米米クラブ). Just before their first live appearance, one of the session drummers bailed out the group and the staff brought in Char to be the session drummer.

After releasing a few singles and an album in the next year, the band slowly began to write and compose their music. The band also began to have more of a funk feeling to their music as they performed live in costumes and makeup. This made the band be notice a bit until 1988 when they released the hit singles KOME KOME WAR and FUNK FUJIYAMA a year later. During that same time, the band started to form their own fan club, called COME COME CLUB. They also started their own concert tours that were more like music entertainment shows with the band dancing in costumes.

In 1992, the band released the single Kimi ga Iru Dake de as the theme song to the TBS dorama Sugao no Mama de. The single's release was in well response as it sold over three million copies and boost up the fan base for the band even more. The song, Kimi ga Iru Dake de, has been a popular hit among cover artist and been cover many times including by Hello! Project on their 2009 album Champloo 1 ~Happy Marriage Song Cover Shuu~. After single, the member started to get more active as Ishii would become a movie producer.

But sad news came when in 1995, guitarist and keyboardist Joplin Tokuno would retire from the group. The reason why he was left was because the members wasn't getting their own credit for their own composing and lyric writing that they deserve as Ishii was only getting the credit. But, this all changed when Joplin Tokuno left the band as the band members got their own individual credits for all their hard work on the band's music.

After the drummer, RYO-J, left the group after Joplin Tokuno, the group announced in 1996 that they were going to break up. Surely enough, in March of 1997, the band went their separate ways after performing together for the last time at the THE LAST SYMPOSIUM concert.

Eight years later, the band got back together to perform at Char's 50th birthday party after her sons requested Ishii to perform at the bash. A year after, the band released the album Kome ~Best of Best~ and the band played at various live houses to celebrate their 20th anniversary. Then on March 2006, at final of Ishii solo tour, he appeared on stay with Double Trouble (K2C costume characters) and said "Kome Kome Club begins", claming the band was reunited after a seven year hiatus. The next morning, the band officially re-open their activities. However, due to mixed reactions from both members and the fans, the band did a limited number of activities. All the members came back except trumpet player Himalayan Shitagami, whose role got replaced by Shiro Blacky.

In 2007, the band released their first album in ten years, entitled komedia.jp. They also appeared for their 3rd time on the special program Kouhaku Uta Gassen.