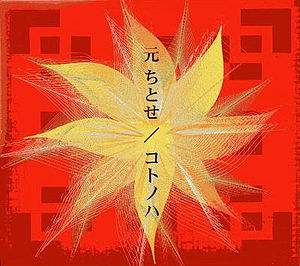 Kotonoha is the second mini-album released by Hajime Chitose. This was released only five months after her debut mini-album Hajime Chitose. It is her second release on indies label atsugua records, a subsidary of Office Augusta. It is also her release featuring all original content. The mini-album reached #37 on the Oricon charts, where it charted for 15 weeks and sold 71,000 copies.