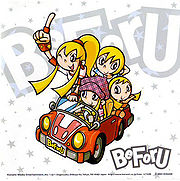 "LOVE♥SHINE" is a song released by BeForU and included on BeForU album as track #6. This is a solo song sung by Kosaka Riyu.

LOVE♥SHINE
Found on BeForU album as track #6. This the original version.
LOVE♥SHINE '06
Found on "Red Rocket Rising" single as track #3. This is a new version.