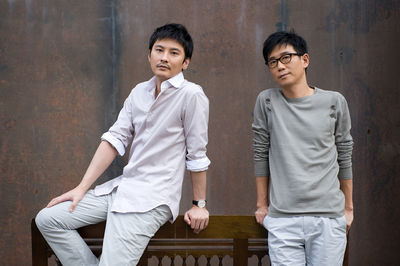 Loveholics promoting In the Air (2009)

Loveholics (러브홀릭) (formerly known as LOVEHOLIC) is a Korean pop band under the FLUXUS MUSIC label. Debuted as a 3-member band in 2003, since 2008, and after losing the vocalist, they are a instrumental band which features different vocal guest on their songs.

Kang Hyun Min and Lee Jae Hak first started LOVEHOLIC in May of 2002. After holding online auditions for a vocalist, they recruited Ji Sun. In April of 2003 they released their first album Florist. The band appeared on several soundtrack albums following that same year, and in October they released [Re:All] Florist, a repackaged version of their first album that featured songs from the soundtracks compilations as well as some remixes.

In August 2004 the group released their second album, Invisible Things. LOVEHOLIC's popularity continued to grow and the band's songs appeared in many dramas and television commercials. Singer Ji Sun appeared as a guest vocalist on several albums, most notably Epik High's song "Paris".

In 2006, the band released their third album, Nice Dream, and their first cover album, RE-WIND. Also in 2006 the group debuted in Japan with the single self-titled single "LOVEHOLIC". On that same year they would release one more single single in Japan, "Chara no Mori", and the Japanese versions of Florist and Nice Dream, however all their songs were still in Korean.

In late October of 2007, Ji Sun left the band but LOVEHOLIC decided not to disband. Short after she left, they released the special album Dramatic & Cinematic, which included 25 songs of their songs featured on dramas/films/anime soundtrack.

The now duo first changed their group name to Loveholics (러브홀릭스) and as the band was missing a vocalist, they featured guest vocals for all their new songs. Loveholics' first release as a duo was the digital single "Butterfly", which counted with 10 different vocal guests.

In 2009, Loveholics released their second digital single, "MIRACLE BLUE", this time featuring only one vocal guest, the actress/model/singer Shin Mina. In September 2009 Lohelics released their first full album since Ji Sun left, In the Air. The album once again counted with the participation of some of the guest vocals featured on "Butterfly", plus new singers such as: Woo Mi Jin, Park Hye Kyoung and Taoka Miki from the Japanese band the Indigo. 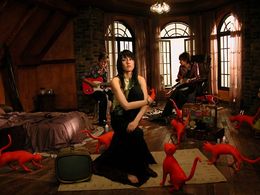