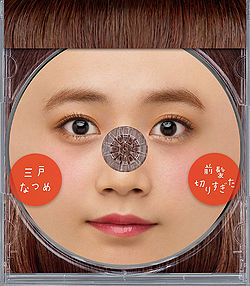 "Maegami Kiri Sugita" is the debut single released by Mito Natsume. The song "Colony" was used as the theme song for the movie Koisuru♡Vampire and a CM song for Gunosy app service, while "Kyabetsu no Yatsu no Uta" was a cheer song for the snack Cabbage Tarou. First press copies came with a special sleeve packaging, and when purchased from Tower Records, the single came with a B2-size poster.

As part of a marketing scheme, eleven PVs using the A-side track were released to promote the single. They include the "prelude" version (officially termed "Gakuen version") which was leaked onto the Internet on February 8th by her creative director Kusaka Keita against the knowledge of Mito's label; Daruma version; Genchou version; Hakusai version; Odeko-chan version; Friendly jidai version; Rakugaki version; Yougisha version; Mure version; Kani-sama version; and Tawashi version.