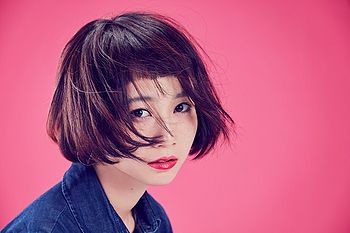 Mito Natsume started her modeling career in Kansai area in 2010 by doing salon modeling and posing street snaps for the popular magazine Kansai girls' style. After moving to Tokyo in 2013, within a year she was crowned the most popular model by readers of various Aomoji-kei magazines. She currently models for such magazines as mer, Zipper, and SEDA. Her first book, titled Natsume-san, became a smash hit, selling more than 50,000 copies. Mito's trademark is her short bangs, which she has had since junior high school.

Her debut single "Maegami Kiri Sugita" is produced by Nakata Yasutaka of Perfume and Kyary Pamyu Pamyu fame. Mito, as well as her creative director Kusaka Keita, are from the Kansai region, and as such Mito was debuted with the idea of fusing Nakata's trendy music with a more Kansai-like attitude. It was also Kusaka's idea to create eleven music videos for her debut track in attempt to both distinguish her from other artists and have a viral hit.