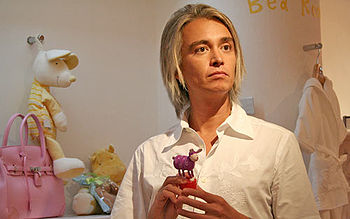 Marc Panther (マーク・パンサー) is a former Men's Non-no model, MTV Japan VJ, and is currently the vocalist, songwriter, and rapper for the Japanese pop group globe. He was born to a French father and a Japanese mother on February 1970 in France. As a child, he participated in TV CM's, including one for Lipton Tea. In 1991, he released a debut solo album, entitled Ciao L'Amour Koi ni Sayonara and became a VJ for MTV Japan at the same time. In 1995, he became a rapper, under the name MARC, for the band globe on the invitation of Komuro Tetsuya even though didn't know how to rap at the time. Several months before globe's debut he had already provided his vocals for trf's album dAnce to positive, another group produced by TK.

Marc got married in 2002 and currently has one daughter.