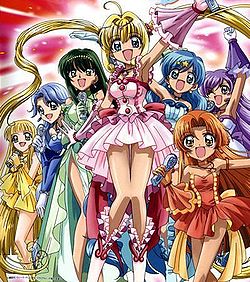 Mermaid Melody Pichi Pichi Pitch (マーメイドメロディー ぴちぴちピッチ) is a magical girl manga written by Yokote Michiko and drawn by Hanamori Pink. The manga was originally serialized in Nakayoshi from 2002 to 2004, spanning a total of seven volumes. In 2003, an anime adaptation was made spanning two seasons.

When Mermaid Princess Lucia was young, she rescued a young boy who had drowned and entrusted her Pink Pearl to him. Years later, thirteen-year old Lucia travels to the surface to live as a human when she finds that same boy, Kaito. Although she is in love with him, Kaito cannot recognize Lucia's human form compared to the mermaid he once met. To make the situation worse, Lucia cannot reveal her mermaid identity to to a human, lest she wants to turn to foam. She then decides that Kaito must discover himself who Lucia really is.

But that isn't all of Lucia's problems. The kingdoms of the various oceans have been attacked by Gakuto and his water demons in search of the seven pearls of the Mermaid Princesses. Lucia, together with fellow princesses Hanon and Rina, team up to find the remaining princesses before the enemy, and should they be attacked, they can transform into idols who fight with the power of song.

Music plays an important role in the story, for both the heroines and the villains use songs to fight. As such, the major heroines and villains have several character songs.