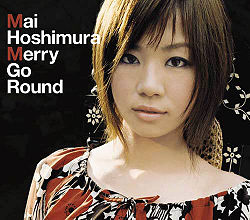 "Merry Go Round" is the tenth single (ninth major label single) released by Hoshimura Mai. The title track was used as the fifth ending theme for the anime Yakitate!! Japan. The first-press version of this single came with a large Yakitate!! Japan sticker. The single reached #85 on the Oricon weekly charts and charted for one week, selling 1,038 copies.