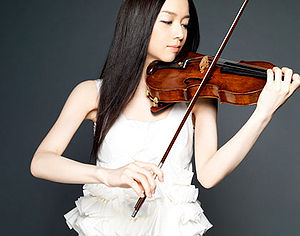 Miyamoto Emiri (宮本笑里) is a Japanese classical violinist signed to Sony Music Entertainment. She made her debut as a solo artist with the album "smile" in 2007. She is also the daughter of Miyamoto Fumiaki, a world renowned oboe player. 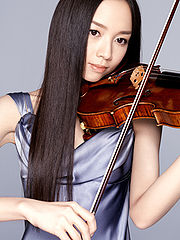 Miyamoto Emiri was born on December 7, 1983 in Tokyo, Japan but soon moved to Germany due to her father's work. In 1991, when she was 7 years old, her family returned to Japan and she attended elementary school. She began to learn how to play violin at this time. Even though her father opposed to it at first, Miyamoto said that a friend inspired her. In 1994, she moved back to Germany during junior high. In 1996, at the age of 14, she topped the Germany Düsseldorf Student Recording Competition. In 1999, she returned to Japan and entered Tokyo College of Music for high school. She then continued to the college section of the same school.

In 2003, Miyamoto attended the Soloist course at Toho Gakuen School of Music. During this time, she also joined Vanilla Mood under stage name Emilee. On January 7, 2005 Miyamoto graduated from the group to pursue a solo career; she was replaced by Waka. On December 14, 2005, she made her first TV appearance as solo artist under her real name, playing with her father for the first time. In 2006, she joined Nodame Orchestra, a musical group formed for the anime adaption of Nodame Cantabile.

In February 7, 2007, her song "passion cachée ~Himeta Omoi~" was featured on "image 6", leading to her debut 5 months later. On July 18, 2007, she made her debut as solo artist under Sony Music Entertainment with the album smile.

In 2008, she collaborated with solita for the second season of the anime adaption of Nodame Cantabile. "Tokyo et Paris" was released on November 12, 2008 with vocals by solita, violin by Miyamoto and French lyrics. In 2009, she became one half of the classical-pop crossover duo, Saint Vox, with Jade Valerie.