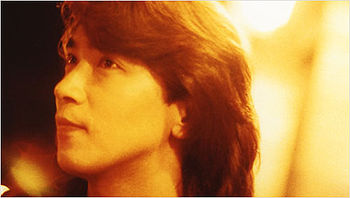 Nagano Shiina (永野椎菜) is a Japanese pop producer, lyricist, composer, and arranger. Is is best known for being one half of the popular group TWO-MIX. Aside from his main project he has also written songs for a couple seiyuu. In 2008, he started his own solo project called ShiinaTactix.

Nagano Shiina was born and rased in Kumamoto Prefecture, Japan. After he graduated from high school Nagano moved to Tokyo in 1984. Here he begain his career working as a model and stage actor, and he also started writting poetry. In 1989 Nagano made his song-writting debut by contributing songs to Nagai Mariko's MIRACLE GIRL album. For Nagai's song Nagano worked with composer Karashima Midori. Later in 1991 the two also wrote songs for seiyuu Hayashibara Megumi.

In 1992, Nagano met singer and seiyuu Takayama Minami. She was working on a solo career, and Nagano wrote several songs for her and even produced her debut album, Endless Communication. During the same year Nagano became an actor for radio doramas, and he work as one until Takayama started to talk to him about forming a band. Later in 1994 the two teamed up with Abukawa Osamu and formed the group ES CONNEXION. After the release of the groups sole album, RHYTHMIX, Abukawa left the group which forced it to disband.

Nagano and Takayama Minami decided to go ahead without Abukawa, and formed another group. The two made their debut as TWO-MIX in 1995. Nagano worked as the groups lyricist and arranger, while Takayama worked as the vocalist and composer. The group become really popular in the 1990s, and contribuated several songs to the Mobile Suit Gundam series. After a series of name, label, and guest line-up changes the band went on hitaus in 2007. Nagano announced on his blog that the band would make a comeback in 2009.

Aside from TWO-MIX, Nagano started on his solo project ShiinaTactix in 2008. He also begain composing songs.