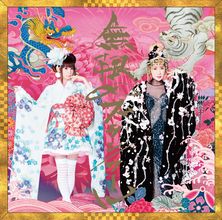 "Neko Boogie" is a collaboration song recorded by the singer Nakagawa Shoko and composer Hosono Haruomi under the stage name Shokotan♥Haruomi. The song was used as the opening theme for the anime Omakase! Miracle Cat-dan (Shokotan original draft animation) and was released digitally on October 14th, 2015.

There are two known versions of "Neko Boogie" to be found in Nakagawa Shoko's discography. These include: