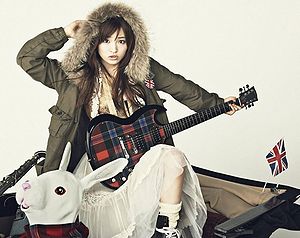 Okamoto Rei made her debut when she became a fashion model for the junior fashion magazine nicola. She auditioned for the magazine and won their Grand Prix prize in 2003, became a nicomo (nicola model) and was placed with Aragaki Yui on the cover of the February 2003 issue. She was an active model under exclusive contract for the magazine and was also part of the magazine's one-shot musical unit, nicomono.

In 2006, Okamoto transferred from the Senkusha affiliation office to Evergreen Entertainment, which is her current office. She began to get minor roles in dramas, including her first dorama, "Seito Shokun!".

Okamoto graduated from nicola in spring 2008 in order to focus on her upcoming career in the entertainment industry, with music being a high priority. The lyrics she pens for her music are credited to her forename, Rei. In addition, the guitar that she plays for her music (and that can be seen on the covers of her singles) is a Gibson SG designed by Okamoto herself.