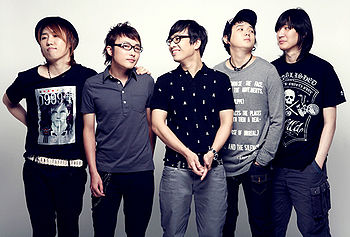 Pia (피아, or 彼我; Universe and I or You and I) is a Korean rock band produced by Seo Taiji.

The group first formed in Busan, South Korea in June of 1998. In August 1999, the group was awarded first place at the 'Busan MBC Rock Festival.' After pouring out cynical and furious sound in local club concerts and several rock festivals, Pia moved its base camp to Seoul and released their debut album named Pia@Arrogantempire.xxx in March of 2001.

The band began gaining a great deal of attention and in 2002 were invited to perform at the ETPFEST along side artists such as Seo Taiji, hyde and Tommy Lee.

At the end of the 2002, Pia joined Seo Taiji's record label Goesoo Indigene Label and released their second album titled 3rd Phase, which the band wrote, recorded and produced by themselves. The album, released in August of 2003, was another hit, and the single, "Gloomy Sunday" received a fair amount of airplay.

The group also began gaining some international fame. After performing at several of their own concerts, Pia performed with Linkin Park in October, and Limp Bizkit in December of 2003. In May 2004, Pia joined Seo Taiji in Vladivostok, Russia and spread Korea rock music to Russian rock fans. The following month, the group joined Linkin Park on a tour of Hong Kong and Singapore.

In May 2005 Pia released their third album, Become Clear.