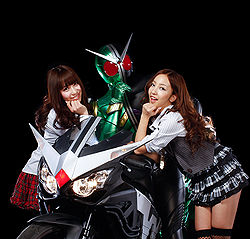 Queen & Elizabeth (クイーン＆エリザベス) is a Japanese pop unit from AKB48 based on the fictional characters of the same name from the TV Asahi series Kamen Rider Double. The group features AKB48 members Itano Tomomi and Kasai Tomomi performing under the names of the characters they play on the series.