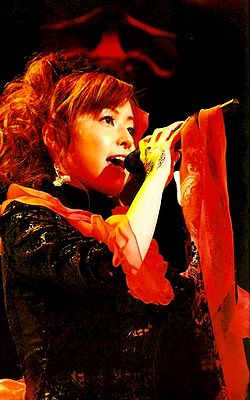 REMI is a Japanese singer. She is best know for her work with Takanashi Yasuharu and the fantasy band Sound Horizon.

In 2006, REMI was announced as one of the new singers for the second era of Sound Horizon along with KAORI, YUUKI, and RIKKI.

in 2012, REMI started uploading videos on her youtube accound, Ventoarioso, of her singing her own songs as well as covers of latin songs.

In 2013, Yuki Kajiura announced that REMI is the vocalist behind the vocal songs she composed for the anime Sword Art Online. Since then, she appeared in Yuki Kajiura Vol.#10 Kaji Fes and performed Luminous Sword along with her long-time Sound Horizon co-vocalist, KAORI. Later that year, she released her first solo album Fairy Dance under her own label Stargarnet which is a sub-label of King Records. She again provided for the vocals on the vocal songs that Kajiura composed for the NHK Documentary Rekishi Hiwa Historia.

In Summer of 2014, Kajiura revealed that REMI is singing the chorus for Kalafina's newest song, heavenly blue. Remi also announced a re-release of her first album which contains an English version of the title track and will be released as Missing Season -Fairy Dance-