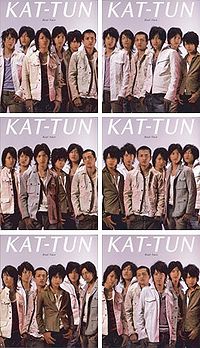 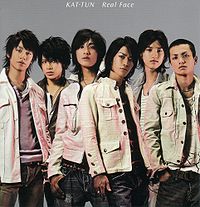 Real Face is KAT-TUN's debut single. It was released in two versions: six limited editions, with each jacket featuring a different member in the center, and a regular edition. It was also available as part of a box set which also included the Best of KAT-TUN album and the Real Face Film DVD. Due to a national holiday, Real Face was released on Sunday of the week before and was not charted for that week. It sold 754,237 copies in its first week, breaking ARASHI's record for best-selling debut single. It reached a peak position of #12 on the Global Track chart in week 14 of 2006. By the end of the year, Real Face had sold 1,038,430 copies, becoming the #1 single of the year. It charted for 44 weeks and sold a total of 1,045,783 copies.

There are two versions of Real Face to be currently found in KAT-TUN's discography. These different versions are:

Real Face
Found on Real Face single as track one. This is the normal version set to the PV.
Real Face #1
Found on Best of KAT-TUN album as track 15. This version was arranged by Matsumoto Tak and Tokunaga Akihito.