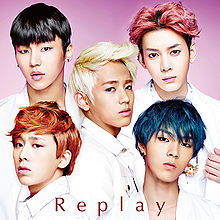 "Replay" is the first Japanese digital single released by MYNAME. It's a Japanese version of their Korean song of same name.