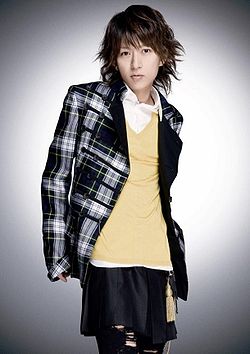 TETSUYA (also known as tetsu and TETSU69) is the founder and bassist of L'Arc~en~Ciel. In December 2005, it was announced he would also be playing bass for a new band called creature creature with the vocalist of DEAD END, MORRIE.

Ogawa Tetsuya was born on October 3rd, 1969 in Osaka, Japan. Around fifth or sixth grade he began developing an interest in music. In middle school he met ken, who encouraged him to pick up the bass so that they could play together. He became obsessed with the band DEAD END and by high school was planning to start a band. His first band he joined he later renamed Byston Well after an anime. They performed covers of many DEAD END songs. Eventually the drummer and guitarist quit and he asked ken to join, though they had started attending different schools. Eventually ken quit to attend college and the band fell apart. This was when tetsu first decided he wanted to start his own band from scratch. Eventually he started L'Arc~en~Ciel, which turned out to be more successful than anyone expected.

During L'Arc~en~Ciel's first break from 2001-2003, he pursued a solo project under the name of TETSU69. During their second break in 2005-2006, however, he began working with vocalist Morrie, formerly of the band DEAD END which he had idolized as a youth and still counts as a great influence. They have formed the band creature creature. He also released a solo single in 2007 titled Can't stop believing.

In November 2007, TETSUYA announced that he will be marrying model and talent Sakai Ayana.

Note: All releases are under the name TETSUYA unless otherwise specified.