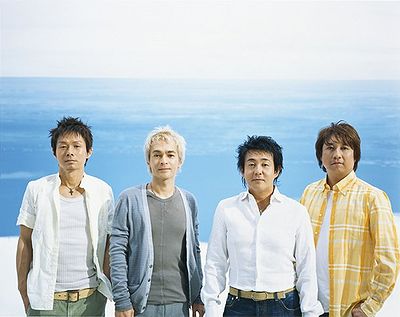 TUBE is a Japanese pop rock band that debuted in 1985.

TUBE started off when Maeda, who was working for Being at the same time, met bass player Kakuno at a live house and they formed a small group while in high school. Matsumoto soon joined as the guitarist due Kakuno and him being high school buddies. The band made their professional debut at the Being Festival soon after they allowed guitarist Haruhata to join. Their also appeared in the Spring of 1986 at the Debut Convention Live at Tokyo Princess Hotel. The band's name was Pandora but it was later changed on June 1965 as The TUBES.

Soon after they debut on stage, they released their debut single, Best Seller Summer, in June 1985. A year later, the band changed their name to just TUBE when they release their third single Season In The Sun, which became the group's first big hit. Soon after the release of the single, Maeda soon started his only solo career but continue to sing for the band. The band also participated in the special unit Nagisa no All Stars by the end of the year.

The band soon faced trouble and almost a breakup when Kakuno was involved in a traffic accident on May 1988, causing the band to be on hiatus for a couple of months. As soon he got back from their hiatus, the band decided a year later that they would start writing own music. Maeda would later be quoted that TUBE really debuted in 1989 due them starting to write their own music, This plan worked when the band won their first award in 1990 for Music Excellence from the Japan Cable Radio Awards. They would win the same award from the Japan Cable Awards in 1991 and 1992 for the singles Sayonara Yesterday and Glass no Memories.

When the band hit the 90s, they started to incorporate more of a Latin sound into their music. But this didn't stop TUBE from hitting it big as they obtained the Gold status when they sold over five million copies by the beginning of 1993. The group also hit it big in 1993 when they made their single, Natsu wo Machikirenakute, was the first single to reach #1 on the Oricon charts and became the group's best selling single to date. They also charted #1 on the charts with the follow up single, Datte Natsu janai, and the next single after that, Natsu wo Dakishimete.

In 1994, the group celebrate their ten year anniversary by holding a ten month long public performance that drew in a lot of people. They also released their first ballad album, Melodies & Memories, by the end of the year to commemorate this milestone. In the next year, TUBE released their first live photobook, entitled FIGHT!. They also played for the first time in America at the Aloha Stadium in Hawaii in 2000 to celebrate their fifteen anniversary. By the end of the decade, the group reached the ranks of Consecutive Top 10 Singles.

In 2005, the celebrate their 20 years for being in music, the band went to Hawaii once again and celebrated TUBE Day on June 3rd by having a night concert.