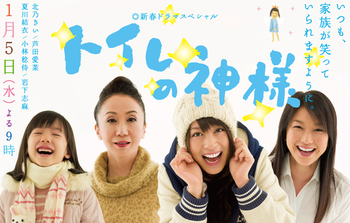 At a young age, Uemura Kana began living with her mother and three older siblings after her parents' divorce, with her grandparents living next door. Her mother worked often, so they did not spend a lot of time together. One day, Kana's grandfather passes away, giving the family an even harder time. Kana ends up moving in with her grandmother next door. During their time together, her grandmother tells her that a goddess lives in the toilet, and if she cleans the toilet every day, she will become a beautiful woman like the goddess. Time passes, and Kana is now a high school student. With a dream in the music scene and the meeting of her first love, Kana and her grandmother gradually grow apart.