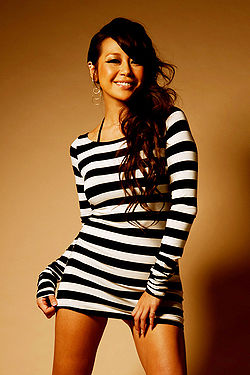 Asami is a Japanese R&B and hip-hop singer and fashion designer. She made her debut in the early 1990s as asami, working with dance pop producer Komuro Tetsuya. The two eventually married and later divorced. After a few years out of the spotlight she re-emerged in 2005 as a hip-hop artist.

Yoshida Asami made her debut in 1994 as a member of the dancing group L.S.D. Two years later she passed the ASAYAN Komuro Garcon audition and was made a member of dos (dance of sound). However, they ended around a year later. In 1998 asami formed the unit TRUE KiSS DESTiNATiON with Komuro Tetsuya; after their fifth single they renamed the unit to KiSS DESTiNATiON. She married Komuro in May 2001, and the two later had a child. In March of 2002 however the two divorced and KiSS DESTiNATiON disbanded.

Asami stayed away from the media until 2005 when she debuted as Asami under KONAMI's new label 573Records. She also began her own brand Aaroma Star and has played an active part as a designer. She released her first album in late 2006 and was transferred to Universal Music Japan.