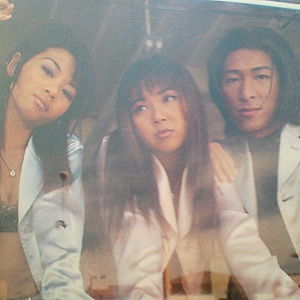 dos (dance of sound) was a Japanese pop group formed in the early 1990’s under the ORUMOK RECORDS label. The group was created and produced by former mega-producer, Komuro Tetsuya. The group was short lived, only spawning three singles and one album. All three members had auditioned on ASAYAN. taeco already had a solo career as a singer, and kaba had been working as choegrapher for artists such as Amuro Namie. asami went on to marry Komuro, and later became a fashion designer.