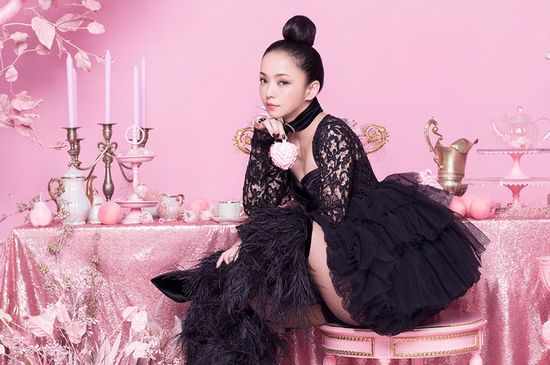 Amuro Namie (安室奈美恵) is a retired Japanese singer, dancer, and actress from Okinawa. In 1992, she made her debut in a group called the SUPER MONKEYS comprised of her and her classmates from the Okinawa Actors School with the single "Koi no Cute Beat / Mister U.S.A.". Amuro became the leader of the group, and found success after their single "TRY ME ~Watashi wo Shinjite~". In 1996, Amuro and the SUPER MONKEYS were split up, and transferred to avex trax. Upon changing labels, debuting with the single "Body Feels EXIT", and her first avex album, SWEET 19 BLUES, selling over 3.3 million copies (at the time the highest selling album in Japanese music history), Amuro became a huge influence in Japanese pop in the 1990s, with her most devoted fans dubbed "Amuraa" (アムラー). Her biggest single, the ballad "CAN YOU CELEBRATE?", was the top single of 1997 and became the highest-selling single by a Japanese female artist. After marriage and personal tragedies, Amuro adopted a more R&B/Hip-Hop based style of music, but returned to her signature dance-pop sound and experienced a comeback in popularity and sales in the latter half of her career. As of September 2018, Amuro has approximately sold 38,000,000 records in Japan. In September 2017, shortly after her 25th anniversary, Amuro announced her retirement for September 16, 2018, and ended her 26-year career with a series of promotions, including a best-of album and tour, a documentary series, a multi-city retrospective gallery, and a final performance in her home prefecture of Okinawa. 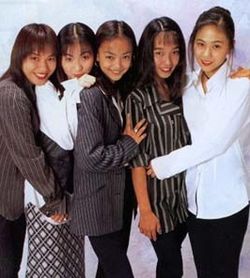 Amuro Namie with the SUPER MONKEYS (1994) 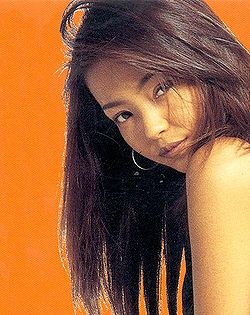 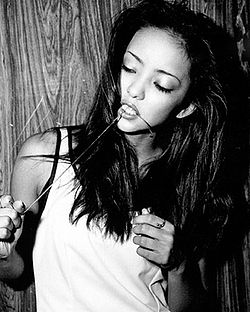 Amuro Namie is from the archipelago prefecture of Okinawa, the southernmost prefecture of Japan. Her mother, Taira Emiko (平良恵美子), was half-Western/European, and she has three siblings. When Amuro was four, her parents divorced and her mother became the sole provider of her and her three children. Amuro was influenced by Janet Jackson when she was young and wanted to dance and sing like her. To fulfill this dream, Amuro tried to enter the prestigious Okinawa Actors' School. However, she did not have enough money at the time to enter the school, so she made a request to the principal of the school, Makino Masayuki, who granted her a scholarship to attend. Amuro faced a commute time of one and a half hours to get to school.

Amuro was made a part of an idol group alongside several of her classmates from the school and formed the group SUPER MONKEYS. The group debuted in February 1992 under the label Toshiba EMI with the single "Koi no Cute Beat / Mister U.S.A.". One member, Makino Anna, was even the principal's daughter. After Makino left, Amuro became the leader of the group; slowly growing in prominence. This is most illustrated by the group changing their name to Amuro Namie with SUPER MONKEYS. The group did not see real success until their cover of "TRY ME ~Watashi wo Shinjite~", which peaked at #8. By the release of "Taiyou no SEASON", the other members' roles were so small that Amuro was solely credited with the song and the other members acted as back-up dancers for her.

In 1995 Amuro and her bandmates moved labels from Toshiba EMI to avex trax after meeting with Komuro Tetsuya and Max Matsuura. However, the SUPER MONKEYS were dissolved in favor of two acts: Amuro as a solo project and the remaining members in a new group called MAX. MAX debuted in May 1995 with "Koisuru Velfarre Dance ~Saturday Night~", which debuted at #91 on the Oricon charts. Amuro and MAX would continue to work together throughout the SWEET 19 BLUES recordings. Amuro first premièred "Body Feels EXIT" at the Avex Dance Matrix '95 TK DANCE CAMP alongside MAX as her dancers. They continued to work together, appearing in Amuro's television performances. MAX would then appear in Amuro's next single "Chase the Chance".

Her later singles "Don't wanna cry" and "You're my sunshine", both #1 singles, solidified her success, culminating in her debut album under avex, entitled SWEET 19 BLUES; not only did it reach #1, but went on to sell over 3.3 million copies, at the time being the best-selling album in Japanese history (a record since beaten by Hikaru Utada's First Love in 1999, with over 7 million copies). Due to Amuro's success and image, she soon became a fashion leader in Japan; followers of her style were labeled as 'Amura' (a pun on her name). The stereotypical 'Amura' had long hair dyed brown, wore short mini-skirts, had thin eyebrows and wore "atsuzoko" thick-soled boots.

Amuro found the greatest success in her career in 1997 with the single "CAN YOU CELEBRATE?". This ballad single was used as the dorama Virgin Road's theme song, and became the #1 single of 1997 due to its massive popularity. Amuro's success during this period also resulted in a massive increase in interest in artists from Okinawa.

On October 22nd, 1997, at the peak of her popularity, Amuro shocked fans and members of the press with the announcement that she had married label-mate SAM, a member of the avex dance group TRF. Furthermore, she announced that she was three months pregnant and announced on a one-year hiatus to focus on her pregnancy. In the meantime, two releases were made to tide fans over: a re-issue of her "CAN YOU CELEBRATE?" single, and her first best-of collection, entitled 181920. On May 19th, 1998, her son, Haruto (温大), was born.

After giving birth to her son, Amuro returned to the music scene in December 1998 with the ballad "I HAVE NEVER SEEN", used as the dorama Yonige-ya Honpo's theme song, which reached #1 on the charts. Three months later, Amuro released a second single, another ballad called "RESPECT the POWER OF LOVE", on March 17th 1999. However, tragedy struck when on the day of the single's release, her mother was brutally murdered by Amuro's step-uncle Taira Kenji in Okinawa. According to press statements, Taira Emiko was walking with her second husband (Amuro's step-father) when Taira Kenji repeatedly ran over the couple and assaulted them with an axe. While Amuro's step-father survived the ordeal, Taira Kenji later committed suicide after the event. Amuro cancelled all promotions for the single and headed home to Okinawa.

After taking another break from the industry (Amuro later left a message to her fans in January 2000 stating that she had been seriously thinking of retiring, however was convinced not to by the kind words from her fans), Amuro returned with the singles "toi et moi" (Pokémon: The Movie 2000's ending theme song) and "SOMETHING 'BOUT THE KISS". "SOMETHING 'BOUT THE KISS" was Amuro's first real step towards an R&B-oriented sound: the song was the first of hers to be produced by American producer Dallas Austin, known for producing big-name American acts such as Madonna, Janet Jackson, Boys II Men, and TLC, whom Amuro would later collaborate with in future projects.

After her music style began to change from dance-pop to R&B, on top of her private setbacks made public, Amuro's sales had declined significantly, however she had a hit single in 2000 with "NEVER END", which sold over 640,000 copies, and was noted for being the theme song for the 26th G8 Summit, held in Okinawa; Amuro also performed the single at the summit. By the end of 2000, Amuro released two albums within one year, GENIUS 2000 and break the rules, both of which signaled a change in musical direction from her debut. In 2001, Amuro released her first single, "say the word", that featured lyrics written by Amuro herself. Amuro also participated in the 9/11 charity music project song+nation, founded by Komuro Tetsuya, with m-flo rapper VERBAL on the song "lovin' it", released as a single on December 27th; it became the last collaboration between Amuro and Komuro for another 17 years.

In late 2001, Amuro was announced to be a part of a collaborative hip-hop/R&B project called SUITE CHIC in which she was the main vocalist. After releasing a special single written for her fans, "I WILL", Amuro's second best-of collection LOVE ENHANCED♥ single collection was released, featuring re-arrangements and re-recordings of her solo singles from 1998 to 2002.

On July 10, 2002, news came that Amuro had divorced her husband, SAM, after five years, who initially received sole custody over their son. At this time, Amuro was dealing with declining popularity among the rise of other Japanese singers, such as Utada Hikaru and labelmate Hamasaki Ayumi, and her much-publicized personal troubles. 2002 saw two more activities from Amuro: the release of "Wishing On The Same Star" (for the film Inochi' originally written by American songwriter Diane Warren) and her debut SUITE CHIC release, "GOOD LIFE / Just Say So". This single did not chart anywhere near where Amuro had charted for the last eight years (only peaking at #35).

2003, however, was a more productive year for Amuro. Between her solo work and her SUITE CHIC project, she released four singles and two albums, most of which continued her dive into R&B and hip-hop. These projects began a long working relationship with Japanese singer-songwriter michico, who would collaborate with Amuro for numerous singles that would define Amuro's style during her R&B era. Her sixth album, STYLE was her first hip-hop and R&B-heavy album and featured no contributions from Komuro Tetsuya. It was the lowest-charting album of her career, peaking at #4, and selling less than a quarter of a million copies in Japan. To promote her the album, Amuro embarked on her first international tour, namie amuro SO CRAZY tour featuring BEST singles 2003-2004, which made stops in Taiwan and South Korea (her only tour that featured South Korea in its schedule). At the end of 2003, her SUITE CHIC side project was dissolved; in future interviews, Amuro expressed interest in reviving the project, an idea that would eventually not materialize. She also appeared on the annual New Year's television special Kohaku Uta Gassen for the last time until 2017, for a total of nine consecutive appearances. 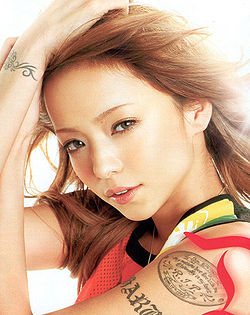 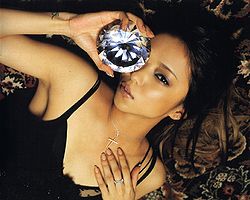 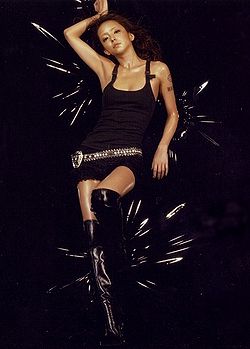 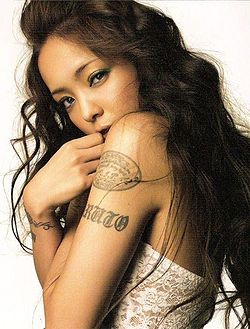 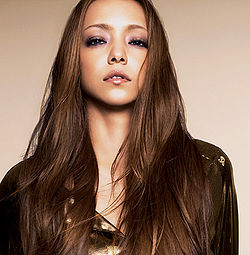 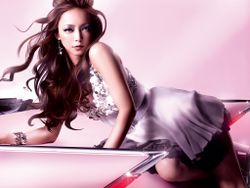 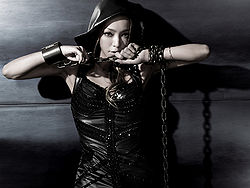 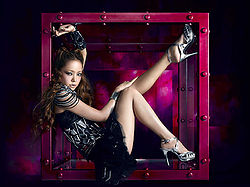 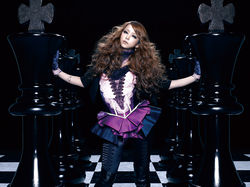 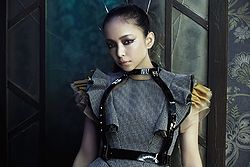 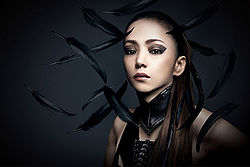 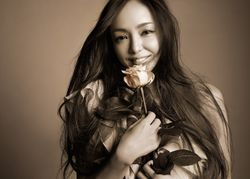