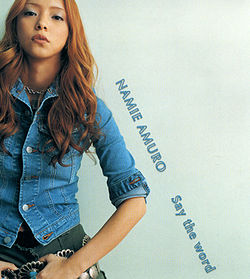 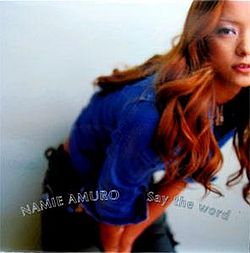 "Say the word" is the 18th single released by Amuro Namie, and her 7th vinyl record. It was used as the commerical song for KOSÉ Cosmetics Luminous line of lipstick. This is Amuro's first single since severing ties with her former long-time producer Komuro Tetsuya. The song is not found on any of her studio records, but was later placed on her second best album LOVE ENHANCED♥ single collection, which was released five months later. It was produced by Swedish producers Ronald Malmberg and Thomas Johansson who are best known for their work with British pop group A-Teens.

During the promoting for the single it was highlighted that this was Amuro's first single to have self written lyrics, she had previous written the B-side "ASKING WHY". However Malmberg and Johansson previous sold to track to Danish artist Jeanett Debb and it was included on her Virtualize album released in January 2001[1]. Even though the lyrics are credited solely to Amuro, it shares English lines from Jeanett's version of the song. The version used in the commercial is different from the one found on the single, with it being closer to Jeanett's original version. This is one of two singles to feature lyrics which Amuro has written.

The single reached #3 on the weekly Oricon chart, and ranked for a total of eleven weeks. It sold a total of 183,840 copies.