Dreaming I Was Dreaming 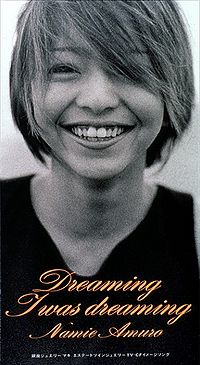 "Dreaming I was dreaming" is the ninth single released by Amuro Namie. It was used as the Ginza Jewellery Maxi Estate Jewellery commerical song. The single was released right after the announcement of her marriage to SAM (from the Komuro Tetsuya produced group trf) and her pregnancy, after its release she went on a year long hiatus. The song is not found on any of Amuro's studio records, but it was issued on her first best album 181920 in 1998. It samples T. Rex's "Liquid Generation".

The single reached #1 on the weekly Oricon chart, and continued to rank for a total of 10 weeks. It sold 558,830 copies, becoming the #42 single of 1998. It was also certified double platinum by the RIAJ.