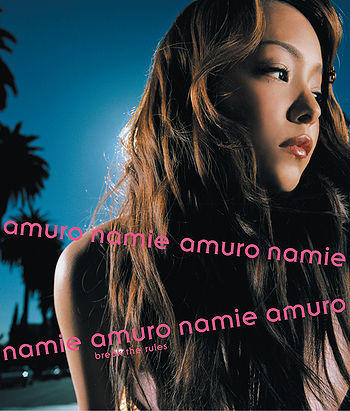 break the rules is the fourth studio album released by Amuro Namie. This albums was released 11 months after her third record GENIUS 2000. It is her final album working with her long-time producer Komuro Tetsuya, and features American R&B producer Dallas Austin (who first worked on her precious record). The song "LOOKING FOR YOU" is Amuro first track to be sung in complete English. "PLEASE SMILE AGAIN" was released two months prior to the album, and a month later she released the re-cut single "think of me / no more tears" along with the "no more tears" vinyl.

The first press edition of the album came housed in special packaging. It came in a pink translucent slipcase, with a a foldout poster, and foldout cards of photos of Amuro in different cities around America, mostly New York City, New York and Los Angeles, California. The album art was taken by Uchida Shoji with art direction by Tycoon Graphics, making it her first album shoot not taken by Hirama Itaru.

The album reached #2 on the weekly Oricon chart and continued to rank for nine weeks. It sold 334,520 copies, becoming the #69 album of 2001. This is her first record that didn't reach #1 on the Oricon chart. The album was certified platinum by the RIAJ[1].